How to Make a Zombie

Easy!  Take one old person confined to a hospital bed and pump him or her full of medication. 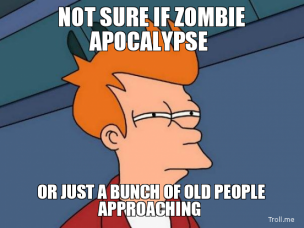 Often done in the name of medical treatment to prolong life – the implications for actual quality of life are frequently ignored. Yes, a tremor that sometimes can be seen in an otherwise paralysed leg may become less obvious with antispasmodic medications, BUT the person’s ability to clearly communicate with family members, or to express a desire to not eat mashed pumpkin, or a desire to die, may now have significantly deteriorated – reducing them to being immobile, staring vacantly and drooling saliva.  Just like a zombie.

This is what happened to my father after doctors added an antispasmodic medication to his daily handful of pills.

Fifteen weeks ago my father sustained a stroke.  He has been in hospital ever since.  The stroke has paralysed his left arm and leg – and left him confused to the point that he often forgets family members, where he is, and what has happened to him.

Medication is a major part of his treatment.  He takes medication for pain, existing heart problems, aggression, depression,  - and now for myoclonus (involuntary spasms in his paralysed limb).  With the addition of each new medication he becomes less able to talk coherently and to follow directions.

This situation has left me feeling angry and frustrated.  Three months ago, I handed copies of my father’s signed Advanced Care Directive to the treating health care team. In this document Dad specified his request to not receive any active treatment - should his health be seriously and permanently compromised by accident or illness.  Further my father has been a longtime supporter of euthanasia, wanting to have the choice to end his life should his health be seriously compromised.

What is the point of having an Advanced Care Directive or a Living Will, if doctors ignore the contents of this legal document, made when by a mentally competent individual planning for their own future?  Why is prolonging life more important than the individual’s preference to not be kept alive confined to a chair or bed in a nursing home? Or to an artificial respirator?

My father is not going to recover.  He is waiting for a room in a high-care facility (nursing home) to be vacated by its previous resident.  For a man who loved lying in the sunshine listening to his favourite music, being stuck for endless weeks inside a health care facility is a desperate situation.

As his daughter I want to encourage doctors to stop all medications, except medications for pain, and let his body take a natural course of action. Follow his instructions even if it means that he will not live long enough to take up the bed in a nursing home. His wishes need to be paramount in making decisions about his health care.